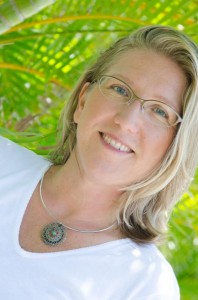 Mariko Clarissa Schmidtauer ~ made in Japan, born in Hawaii to German and Austrian parents. That gives an introduction to her international background.

She moved to Europe with her parents when she was 2 ½ yrs old. After attending Kindergarten in Greece they moved to Germany where she attended an international school with kids from 40 countries. Never having been away from Hawaii for more than 2 years without at least returning for a vacation Mariko kept strong ties to the islands. Now, in her 40’s she has returned.

Mariko has a degree from Haas School of Business at UC Berkeley. She worked in the corporate world in US and Europe for almost 10 years. After working for top management for one of the largest telecommunications companies she worked as a team leader of customer care and as an international senior consultant for an internet start up company, supporting clients in a variety of industries, training them how to make best use of the trading platform.

End of 2003 Mariko realized that instead of helping companies to accumulate more money she wanted to help people. In order to do so she started her journey exploring old healing traditions and her own personal growth.

After working with amazing teachers of old traditions, healers, therapists and professionals, Mariko searched for a vehicle to share all that she had been given. She realized the time had come to share her gifts through the powerful tool of constellation work.

By that time Mariko had lived and worked with Peggy Dylan, founder of The Sundoor School of Transformation www.sundoor.com. Through her she learned to facilitate firewalks, which she has been doing successfully since 2005 and has staffed seven Fire Initation Weeks for Sundoor. In addition Mariko has had four years of mentoring/coaching training by Jon Young, founder of the 8 Shields Institute www.8shields.com  and an inspiring network of 150+ affiliates across North America and Europe focused on nature awareness and community building. Another inspiring influence for her work was a three year apprenticeship with Kevin Anthony Flores of the Mexhica land of the moon/of dreamers Toltec Aztec and Mayan lineage of Nehualism and High Magic of Celtic Shamanism. Also strengthening her connection to her place of birth, Mariko has studied Ho’opono Pono Ke Ala with Aunty Mahealani Kuamo’o www.alohaspiritaunty.com, of the Kaiwi kuamo’o kekua okalani lineage since 2007. Over the years Mariko has crossed paths with other amazing teachers, shamans in Peru, Native American elders, Hawaiian elders and more.

When Mariko crossed paths with Peter de Vries www.constellationworks.com, her experiences came full circle and she realized that Family Systemic Constellation work is the ideal vehicle to share her gifts. She completed her training with Peter de Vries in 2010 and holds two certificates in family constellation work. Peter de Vries has worked with a wide range of constellation facilitators across Europe and the US over more than the past decade. He also brings in to his training the Diamond Approach, Peter Levine’s trauma work and other trauma healing modalities. Mariko feels honored to have found such an amazing teacher.

Over the past few years she has experienced a wide variety of constellations from over 20 facilitators, constantly expanding the possibilities this amazing work and ‘tapping into the field’ allows.

Mariko shares her own experiences and gifts with an open heart, compassion and professionalism.

Based on Mariko’s diverse and international background she has a unique ability to connect to people. She has a deep understanding and compassion and strongly believes in the power within each individual, encouraging individuals to awaken and shine brightly.

With humility and respect, Mariko facilitates coaching/mentoring sessions and constellations with the intention to support individuals as they step into their authentic power and consciously live more fulfilling lives.